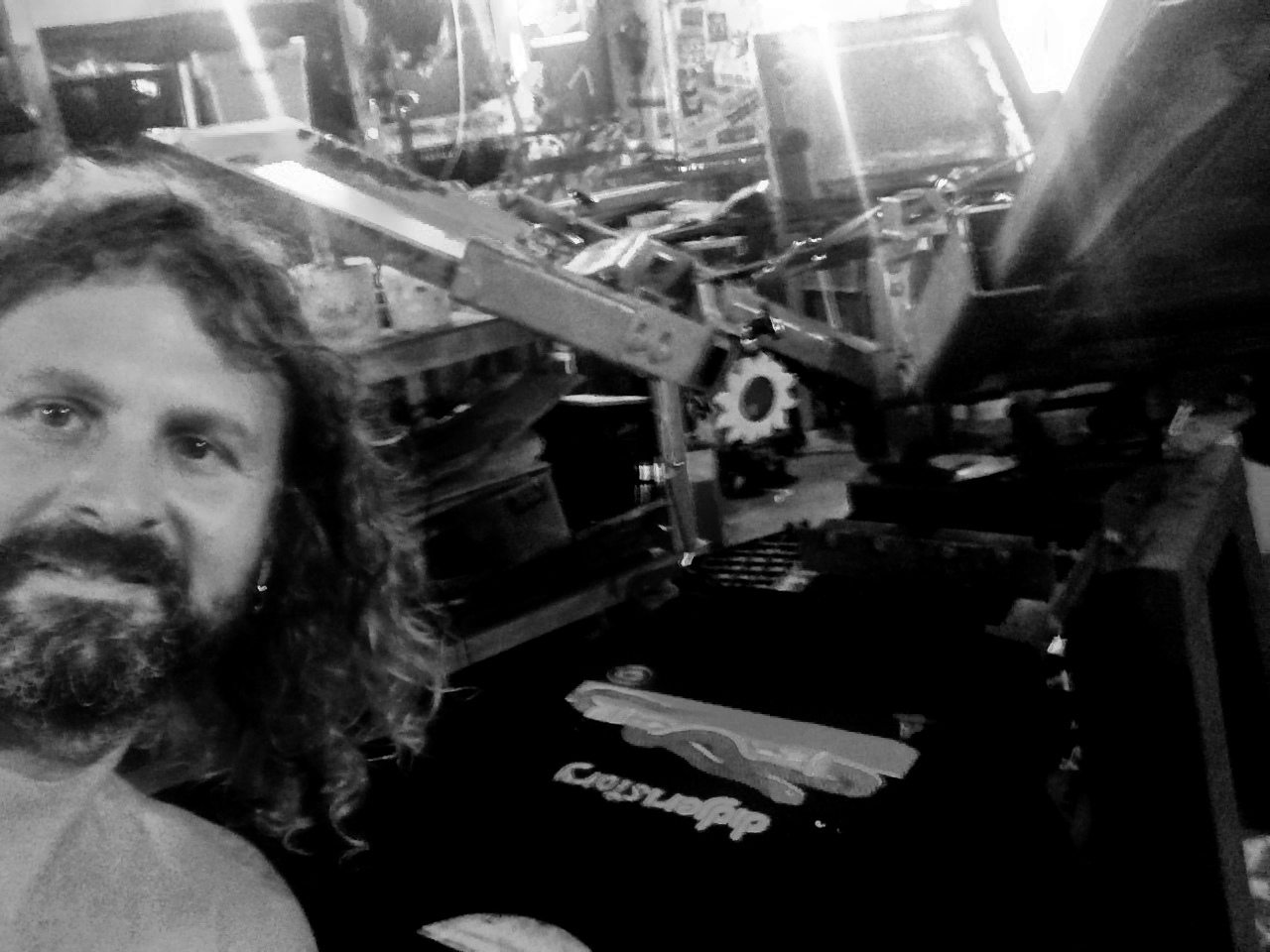 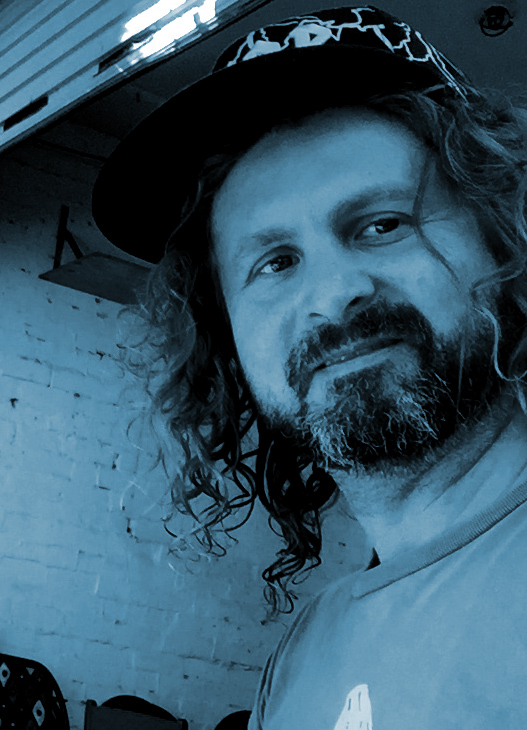 For the last 25 years I have lived in the inner west of Sydney. Since coming to Australia from the U.K in 1987 I have been a painter, screen-printer, stencil artist, D.J, promoter, social and environmental justice campaigner and community builder.

As well as producing visual art I also produce music and co-create events in Sydney and beyond. I spent many years promoting sustainable energy and protesting against Nuclear Power with the collective I co-created Ohms not bombs.

Prior to that I was involved in a group called Vibe Tribe who promoted social and environmental justice through the medium of interactive dance events.

Over the last 25 years I have been involved in underground art, music and social justice movements working with others on projects such as Vibe Tribe, Ohms Not Bombs, Reclaim the Streets, Graffiti Hall of fame,Earthdream , Mekanarky and Uber Lingua

“I like to work in the same way a D.J selects tracks for a set, pulling out various stencils and screen prints from the Vectorpunk image archive and layering them onto the surface”.

My art often refers to experiences gathered during involvement with these groups. Using a mix of different designs and themes I create visual forests that use a variety of mediums to create a certain atmosphere in a chosen space. In some instances I  use repeated and re-contextualized images exploring the idea of ‘art resistance’ to the mainstream cultures ever more present visual language of competition and manipulation.

I am now part of the Tortuga warehouse which is an artists run initiative established in St Peters early in 2008 and is now established as a local gallery which has regular shows.

I have been working on a new website that is revamping an old one.www.ohmsnotbombs.net will be an online archive community focused cultural and environmental events, a snap shot of culture in Australia that I’m proud to be a part of.

If you have any interesting stories, videos or pictures please link them up with comments on the site. 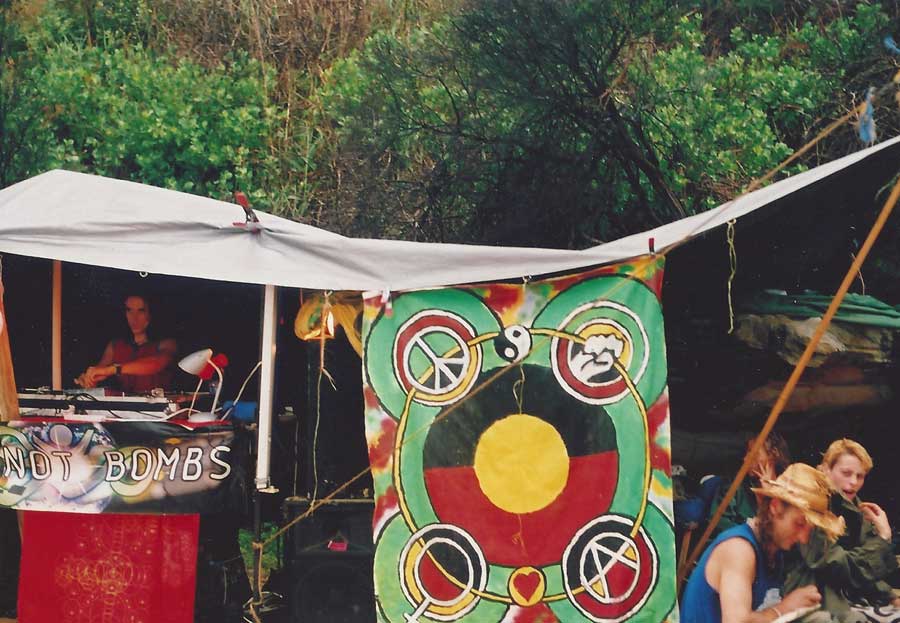 I am an artist, designer and screen-printer currently self employed with my own business called Vectorpunk. I grew up and studied in the U.K then moved to Sydney, Australia in 1987 where I completed my education and have lived and worked ever since. I am on the chair of an artists run initiative in St. Peters called Tortuga Studios, I regularly co-organise and curate group shows at the space that we established in 2008.

The main focus of my art has been screen printed, stenciled and digitally printed light box artwork for venues, clubs and homes. I also create interactive installations for festivals and community events. My other interest is creating events which I have been doing in Sydney since the early 90’s, during this time I have been developing solar powered mobile sound systems utilising wheelie bins.

I am also a teacher regularly running workshops from screen printing to stencil art and music production.

Vectorpunk is my design company which deals with a variety of clients. I produce work in the fields of website and graphic design as well as illustration, murals, video, motion graphics, animation and interior design for venues, homes and offices. http://www.old.vectorpunk.com*see end of document for examples of recent projects.

My work here involves sourcing clients and helping turn their ideas into a finished run of printed garments or posters. I design, make photo emulsion screens, screen-print and manage the business.

Splatdash has recently moved into the arena of large format printing offering digital printing on light boxes and canvas.http://old.vectorpunk.com/screen-printing-service

Vectorpunk is my design company which deals with a variety of clients. I produce work in the fields of website and graphic design as well as illustration, murals, video, motion graphics, animation and interior design for venues, homes and offices. http://www.old.vectorpunk.com*see end of document for examples of recent projects.

My work here involves sourcing clients and helping turn their ideas into a finished run of printed garments or posters. I design, make photo emulsion screens, screen-print and manage the business.

Splatdash has recently moved into the arena of large format printing offering digital printing on light boxes and canvas.http://old.vectorpunk.com/screen-printing-service

I am part of a team who have developed a solar powered mobile sound system made out of a common wheelie bin. Over the last few years the units have become popular at events in Sydney and have been hired and sold to local and interstate councils who have incorporated them into their ongoing sustainable events and youth outreach programs with great success.

Tortuga Studios is an artists run studio complex and gallery space that puts on events and art shows regularly. I work with the team to create and organise regular multi-media art shows.

Part of my role is to promote these events and design and maintain the Tortuga website. I have implemented a system which allows multiple admins to update and maintain the site with profile pages for the various artists involved and posts that inform subscribers of upcoming events. I also manage Tortuga’s social media campaigns on Facebook and create e-newsletters.

Being in the central organising crew for ‘Uber Lingua’ events in Sydney from 2004-2011 meant I was involved in curating multi-media events including running a space at two of the ‘Sydney Festival Opening Night’ events. Recently my events have promoted and incorporated the ‘Sunny Bins’ solar powered mobile sound systems to great effect. I also created radio shows for S.B.S Alchemy and JJJ radio.

I develop and teach workshops in screen printing, stencil art and music production to participants of a variety of ages, working on lesson plans, providing materials and documenting outcomes.http://old.vectorpunk.com/workshops

Here I was working with a team and dealing with deadlines and the distribution of printed material and development of flyer racks. I
was also involved in developing distribution runs targeted towards specific markets.

Literate in the following computer programs

Different Drummer bar Glebe I produced a large mural to cover the outside wine garden wall. Starting from artists impressions I made the artwork first on paper and then expanded it to several large stencils.
185 Glebe Point rd Glebe, contact David 9552 3406

Rodizio Restaurant, Cronulla, This was may largest interior contract produced in 2010-11, a large light box was designed and made for the space behind the bar, another light box was made for the menu display in the front window and the outside was painted with a large mural all with an urban latin theme.
3-7 The Kingsway, Cronulla, contact Rebecca 0425 340 861

Modus project mural, Cronulla Late in 2011 I completed two stencil murals in the Modus Projects office in Cronulla. I painted a large dividing glass partition with an array of oceanic and urban images and created a stencil art African savannah scene complete with menacing dangerous animals in the meeting space.

Umpa dada video I organised a day of shooting, filmed and edited footage and created a music video that included hand drawn animated scenes for a track by Didgeridoo artist Charlie McMahon for the U.K based Arc music label.(http://old.vectorpunk.com/video/umpa-da-da)

Shot and edited an hour and a half long documentary called “Secrets of Centenarians” which interviewed a 103 year old Crows Nest resident, Joseph Jordan about his long life and secrets of longevity.http://www.medigym.com.au/Produced a yet to be released one and a half minute animation for a Sydney based sound production company called King Sound Studio. http://www.kingsoundstudios.com/